Menu
I recently caught up with Gwen Diagram – Software Tester and champion for Women in Tech, to find out more about her experiences in Testing and to hear what advice she has for others looking to forge a career in Testing!

Looking at your LinkedIn you can see that you’re an extremely experienced Software Tester – and also an experienced DevOps Engineer and Scrum Master – what first attracted you to these areas of technology?

I was very lucky to have my father in technology as a child and so I was always encouraged to pursue a career in IT. I did a course in VB6 when I was 15 and always messed around a little bit building websites but as I didn’t go to university I didn’t go straight into technology.
​
I first started off in IT Support – which I got into by luck when I first moved to the UK and then after a few years I moved into Software Testing as I’m very interested in logic and I enjoyed how logical Software Testing was.

I became interested in DevOps as I ended up with a bit of a monitoring obsession – I was talking about monitoring servers in my sleep. Good monitoring is the same as good tests and to be able to support your system, you need to know what is going on! Link that with automation which is an important skill of being a Tester and it fit so well with my current role.
​
The Scrum Master side was a little more interesting – my first role as a Software Tester was originally in a waterfall methodology and I was dragged kicking and screaming into agile – although that seems hilarious when you see the way I work today. I worked at a start up and it became apparent that some process needed to be put around what we were delivering so I volunteered myself to pick up the Scrum Master role as well – which was excellent fun!

There are so many tools to aid the work of a software tester – which do you think are the most important / most used?
​
It depends on what kind of testing you are focusing on, be it security, performance, exploratory or writing automated checks. There isn’t a specific tool that I would recommend for people to use as it depends on the company – but I would recommend the tool being open source. There are so many fantastic open source tools out there at the moment that locking yourself into a paid tool just doesn’t make sense.
A tool I really like using and people might like to have a look at is Gauge by ThoughtWorks. It is a test runner similar to Cucumber but doesn’t use the BDD format, the tests can be written in plain English. It’s available for many different languages such as C#, Java, and Go for example and is very easy to use. Another favourite of mine if you are doing any API testing is Postman. Sharing API collections is so easy and it’s very intuitive.

When considering automation tools – for web or API automation, I would heavily recommend writing the tool in the same language that the developers are writing the production code in. There are many reasons for this, one of them being that the automation framework you are building can be supported by the development team and they will be enthusiastic about pairing and helping write the tests. I’ve received some fantastic advice from developers on how to improve frameworks I have worked on – if it wasn’t in the same language as the application then I wouldn’t have had the opportunity to learn.
​
You speak at a lot of events around the subject of Testing – how did you first find the transition of being more hands-on testing to speaking about it in front of lots of people?
​
I started speaking in 2014 although it seems like a lifetime ago now! The amazing Royd Brayshaw from Agile Yorkshire asked me to speak. I remember being so, so nervous as I hadn’t ever spoken about anything technical in front of people before but it went really well and I got the speaking bug. Agile Yorkshire is such an amazing place to start out speaking, it’s a very friendly environment and Royd is very encouraging.

After speaking at Agile Yorkshire, Royd organised a speaker’s boot camp with Ivor Tymchak, the compere for Bettakultcha where myself and quite a few other people learnt about presentation skills and stage presence – I learnt a lot from this, the main thing being that a speaking slot is very much like playing a gig (I’ve been the front person in quite a few bands). After that realisation, I became a lot more comfortable on stage.

Do you have any tips for other people looking to present to an audience and get a good level of engagement?
​
Yes! One of the main ones is watch Amy Cuddy’s TED talk on body language – it will really improve your confidence before you get on stage. Another, is slide wise, bullet points are distracting, try and keep away from them! When I first started speaking I had a lot of bullet points on my slides – these don’t really work for an English speaking audience as people are reading the points instead of listening to you. I try and have as few bullet points on my slides as possible – although this changes if you are speaking where English isn’t the first language. If presenting to an overseas audience, try and keep bullet points on slides down to one a slide and seven words a bullet point. When searching for pictures on Google, select large images – it means you won’t have blocky pictures.
​
Last of all, you have interesting experiences. People want to hear what you’ve been doing. You are awesome and experienced, go out and speak about your skill! 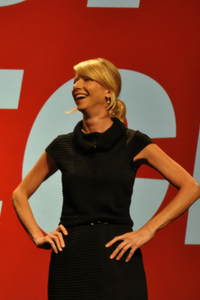 We’re starting to see a lot more discussion in the digital world about Women in Tech, in your experience do you think people’s perceptions of women in tech are changing?

I definitely think they are. From a personal perspective, I now have a lot more ways to communicate with other women in technology. For a few years, I was the only woman in teams of 13+ men – so having ways to speak to other women in technology (events, Twitter, Slack etc) has been incredibly beneficial for me.
​
What do you think would help encourage more girls to get involved in technology from a younger age?
​
Encouraging children into technology can be achieved simply by speaking to them – although that is a lot harder than it sounds! Managing to actually get in front of children is the difficult part but there are quite a few different schemes happening at the moment from code club to work that the Ahead Partnership are doing. Another way is to organise something yourself, Hack Manchester have organised a very successful junior hack for 8-18 year olds and I have heard that the children come up with fantastic ideas.

One of my bug bears around teaching children programming though is I don’t feel that the basics of logic are being taught to them first. Logic should be a compulsory subject for primary school children, the concepts are easy to grasp once they know they exist!
​
I feel that we are on the right track though, I’ve spoken to numerous young adults about the fantastic opportunities that a career in tech has to offer – lets hope they take the offer up!

If you were looking to hire a Software Tester for your team – what characteristics would you look for / what advice would you give to those looking for a new role?

I have done a lot of this of late. I’m currently a Test Manager at Sky in the Identity tribe which is very API based – which I absolutely love. As we are writing API tests I require that the candidate has coding skills – we code in Java but any coding skills are fine, once you know one language it is easy to code in another. I much prefer testers to have skills in open source tools such as Postman – SoapUI isn’t a skill that impresses me. I love seeing great exploratory testing skills. Manual testing isn’t a skill I look for, writing scripts and following them isn’t something that I want in the team. If you can write the script, surely you can automate it! Experience setting up CI and CD is something I absolutely love to see. It’s all well and good writing the tests but if they aren’t running in the pipeline generating quick feedback, are they really that useful? The ability to pair is also very important and respect for developers is compulsory! I really appreciate any involvement in the community, especially any speaking experience as in my tribe to solve issues we usually have a presentation battle. Being able to get your ideas across in a fun manner is so valuable!

Finally if you hadn’t ever got into Testing / DevOps what job do you think you’d be doing now?
​
I’m very passionate about food hygiene after working at Subway for five years in my youth. I never had the chance to work in a proper kitchen but I would absolutely love to work in one now and I’m very into beer, especially the fantastic breweries we have in the north of England such as Magic Rock, Cloudwater and Mad Hatter. With this in mind, I would absolutely adore to run a pub. Something like Friends of Ham but with more cooked food.

However, that’s not what I would be doing I don’t think. I most likely would have ended up working in pensions, not that I would want to! Thank god I ended up in IT!